Catalytic Biotransformations and Inhibition Study of Peroxidase from Luffa aegyptiaca


Background: Present interest in catalytic bioconversions is concerned with 2 major environmental issues. (i) The replacement or substitution of oxidations which involves heavy metal salts and reagents by alternatives using H2O2 as the ecofriendly oxidant. (ii) The prominent issue is the increasing interest in the production of high chemoselectivity, regioselectivity and stereoselectivity of compounds in chemical reactions in order to achieve better byproducts. Keeping these points in view the work on peroxidases have been carried out which fullfills these two goals.

Objective: To determine the enzyme activity in the available source to explore its catalytic efficiency in biotransformations of heavy metal compounds. Optimizing the effect of different oxidants for maximum activity of peroxidase and to study the nature of inhibition of peroxidase in presence of different metal ions.

Methods: Enzyme extracted in large volume from Luffa aegyptiaca fruit. Peroxidase activity measured by spectrophotometric method. Peroxidase catalyzed rate of reaction was determined spectrophotometerically by making use of guaiacol as the substrate and in presence of H2O2, V2O5, VOSO4, VO(acac)2, (NH4)2(Ce(NO3)6), and (NH4)6Mo7.4H2O monitored at λmax = 470 nm. The haloperoxidase activity were assayed by monitoring the formation of halogen by UV/VIS spectra. The steady state velocity of the enzyme catalysed reaction was measured at different concentrations of metal ions like trivalent (Cr3+ and Al3+), divalent (Ca2+, Mg2+, Cd2+, Zn2+ and Ni2+) and monovalent (Na+ and K+) in the range of 0.0 mM to 100 mM at the fixed enzyme saturating concentration. Graph was plotted to determine the nature of enzyme activity inhibition.

Results: Study of rate of reaction by steady state kinetics measurements confirmed peroxidase activity of order of 9.0 U in the fruit extract prepared. The oxidation potential required for the oxidation of guaiacol to tetraguaiacol is 0.575V and the reaction is irreversible. (NH4)2(Ce(NO3)6) and (NH4)6Mo7.4H2O oxidized guaiacol with the rate found to be 0.009 OD/sec in former substituent and the rate of formation of tetraguaiacol was much low in the later substituent found to be 0.003 OD/sec as compared to enzyme with rate 0.01 OD/sec. Enzyme peroxidase was able to oxidize Fe2+ and Mn2+ to Fe3+ and Mn3+ respectively in the reaction mixture. It is found that V2O5 is better oxidizing agent than H2O2 for catalytic oxidation of guaiacol as the substrate. Peroxidases in presence of H2O2 and KBr/KCl/KI act as a viable ecofriendly reagent for the halogenation reaction in organic synthesis. Nature of inhibition by Zn2+ and Ni2+ ions is competitive type. Enzyme activity is inhibited in presence of Cr3+ and Al3+ and the nature of inhibition is uncompetitive type.

Conclusion: Luffa aegyptiaca is a better source of peroxidase having 9 U. UV-Visible spectrum analysis indicated that (NH4)2 (Ce(NO3)6 can substitute peroxidase enzyme under optimized conditions.( NH4)2(Ce(NO3)6 act as a cocatalyst by enhancing the activity twice. The enzyme with H2O2 and KBr/KCl/KI is a suitable environmentally suitable reagent for halogenation reaction in organic and inorganic synthesis. The rate of reaction is highest in presence of V2O5 as compared to other vanadium compounds. Thus V2O5 act as better oxidizing agent than H2O2. Chemical technology can be substituted by enzyme technology which should be developed to removal excess and toxic heavy metals. Salinity required for normal functioning of enzyme is 140mM NaCl and 90mM KCl. Enzyme activity enhanced in presence of Ca2+, Mg2+ and Cd2+ while inhibited in presence of Zn2+ and Ni2+. Nature of inhibition by Zn2+ and Ni2+ ions is competitive type. Enzyme activity is inhibited in presence of Cr3+ and Al3+ and the nature of inhibition is uncompetitive type. Extensive studies are needed to understand the mechanism of inhibition of manganese peroxidase activity by metal ions. 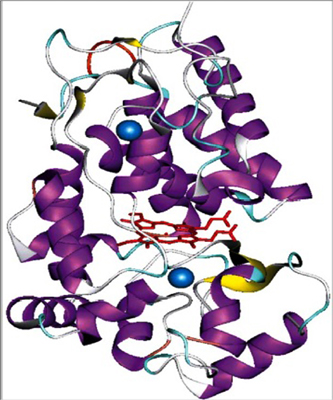