Assessment of Chitosan Based Catalyst and their Mode of Action


Introduction: The popularity of chitosan is increasing among the researchers due to its environment friendly nature, high activity and easy approachability. Chitosan based catalysts are not only the most active and selective in catalytic reaction, but their “green” accessibility also makes them promising in organic catalysis. Chitosan is commonly extracted from chitin by alkaline deacetylation and it is the second abundant biopolymer in nature after cellulose. Chitosan based catalysts are advantageous by means of non-metallic activation as it involves small organic molecules. The robustness, nontoxicity, the lack of metal leaching possibility, inertness towards moisture and oxygen, easy handling and storage are the main advantages of organocatalysts. Traditional drawbacks associated with the metal-based heterogeneous catalysts, like longer reaction times during any synthesis, metal-leaching after every reaction and structural instability of the catalyst for prolonged recycling experiments are also very negligible for chitosan based catalysts. Besides, these catalysts can contribute more in catalysis due to their reusability and these special features increase their demand as the functionalized and profitable catalysts.

Objectives: The thorough description about the preparation of organocatalysts from chitosan and their uniqueness and novel activities in various famous reactions includes as the main aim of this review. Reusable and recycle nature of chitosan based organocatalysts gain the advantages over traditional and conventional catalyst which is further discussed over here.

Methods and Discussions: In this article only those reactions are discussed where chitosan has been used both as support in heterogeneous catalysts or used as a catalyst itself without any co-catalyst for some reactions. Owing to its high biodegradability, nontoxicity, and antimicrobial properties, chitosan is widely-used as a green and sustainable polymeric catalyst in vast number of the reactions. Most of the preparations of catalyst have been achieved by exploring the complexation properties of chitosan with metal ions in heterogeneous molecular catalysis. Organocatalysis with chitosan is primarily discussed for carbon-carbon bond-forming reactions, carbon dioxide fixation through cyclo- addition reaction, condensation reaction and fine chemical synthesis reactions. Furthermore, its application as an enantioselective catalyst is also considered here for the chiral, helical organization of the chitosan skeleton. Moreover, another advantage of this polymeric catalyst is its easy recovery and reusability for several times under solvent-free conditions which is also explored in the current article.

Conclusion: Important organocatalyzed reactions with either native chitosan or functionalized chitosan as catalysts have attracted great attention in the recent past. Also, chitosan has been widely used as a very promising support for the immobilization of catalytic metals for many reactions. In this review, various reactions have been discussed which show the potentiality of chitosan as catalyst or catalyst support. 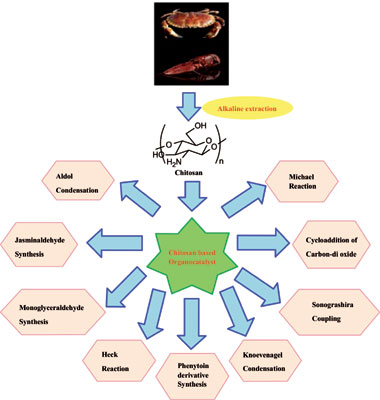