Metal Nanoparticles: An Efficient Tool for Heterocycles Synthesis and Their Functionalization via C-H Activation


Background: Metal nanoparticles have been extensively used in the synthesis of organic molecules during the last few decades especially due to their high catalytic activity. Organic reactions involving C-H functionalisations are very much in demand as they provide a direct method of derivatisation of organic molecules, thus making the process economical. In the recent years, metal nanoparticles catalysed C-H activation reactions have led to the design of useful molecules especially heterocyclic motifs which form the core structure of drugs and thus have high biological and industrial importance.

Results: The discussion reflects the scope of nano-metals as effective catalysts for the synthesis and functionalization of heterocycles as well as the efficiency of nano-metals towards catalysing economic and environmentally viable reaction protocols.

Conclusion: The theme of this review is to correlate nanometal catalysis, heterocyclic synthesis and C-H activation, each of which in itself forms an integral part of modern day chemical research. Thus, the review will hopefully highlight the need for future development and research in this area and be instrumental in guiding researchers towards fulfilling that goal. 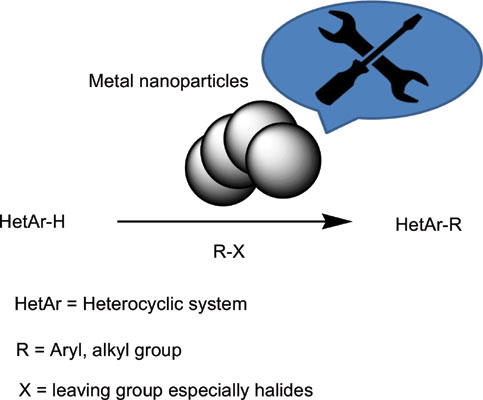