Peptides play crucial roles in the nature and execute almost all biochemical transformations in the form of proteins, enzymes, hormones, neurotransmitters and/or toxins. Just to mimic the effective properties of enzyme in bio-catalysis, we have to gain knowledge in structure of synthetic peptides and their role mainly in catalysis. Application of oligopeptides as catalysts in order to mimic the performance of enzymes is a particularly elegant approach to asymmetric chemical synthesis. The diversity of available amino acids (natural and synthetic), well established coupling techniques, and the ease of modification make peptides ideally suited for the design of potent catalysts. Recently, synthetic peptides have proven to be useful catalysts for a number of fundamental organic transformations such as bromination, sulphonylation, phosphorylation, acylation, C-C cross coupling, aldol condensation, epoxidation, oxidation of alcohol, and asymmetric induction. This review highlights the application of peptides as potential catalysts for diverse organic synthesis and potential role in the asymmetric chemical modifications. 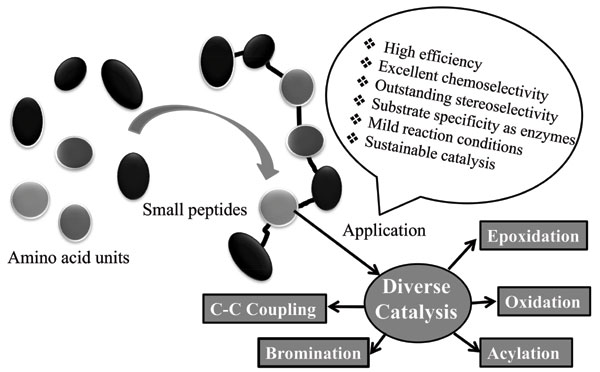